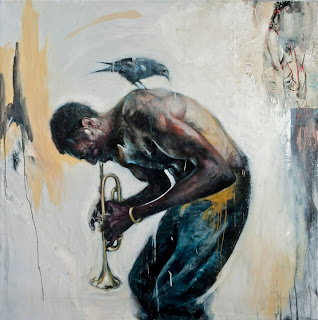 Jason Shawn Alexander is an expressionist figurative painter from Tennessee, now living and working in Los Angeles. His intimate works penetrate to the core of human integrity, often depicting images of figures wrenched in that critical space where the strained coordination of mind, body, and spirit, hangs in the balance of existential woe. Abstract elements now and again emerge by way of exaggerated gestures, elongated limbs, the doubling or tripling of images, hints of apparitions, or the intrusion of foreign materials and text into the paint, which satisfy the rich psychological nature of Alexander’s work.

Suggesting an intense personal narrative, his paintings are imbued with an essential human drama that is his signature quality.
Jason Shawn Alexander
Mar 5, 2013